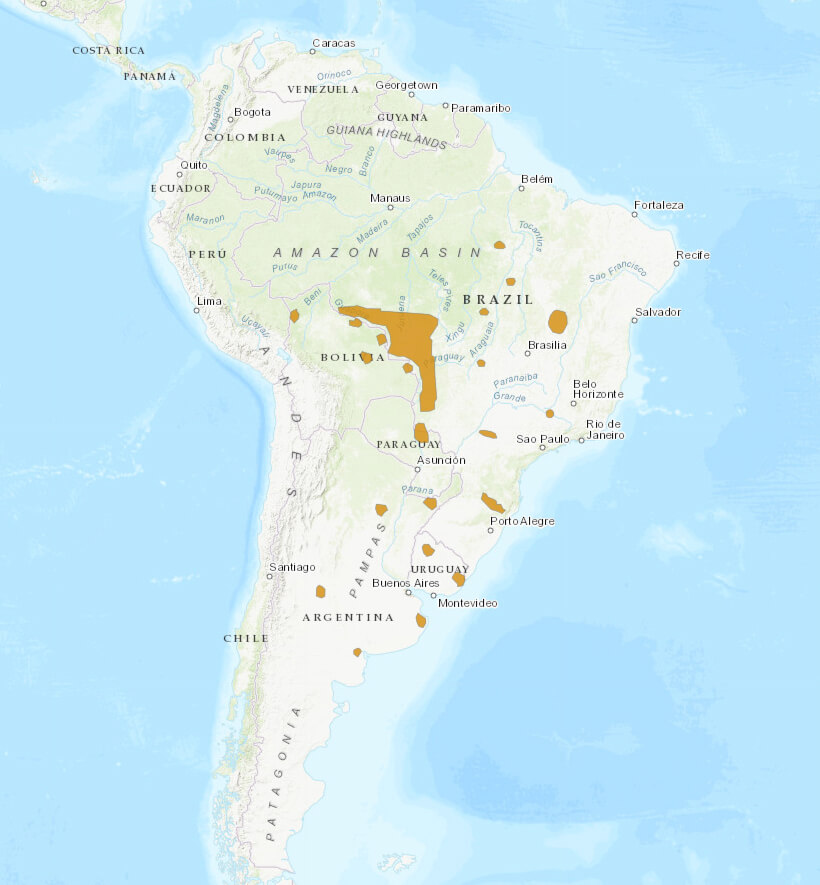 Originally, the species was broadly present across much of South America, stretching from the north of Brazil, through the entire central and southern region, to Uruguay, much of Argentina, and Bolivia. Today, the population of the pampas deer has not only been drastically reduced, but is geographically isolated as well. In the Pantanal and Cerrado, they are still somewhat abundant, but can also be found in isolation in other parts of Brazil. In the Esteros del Ibera region in Argentina, which is very similar to the Pantanal, a huge project is underway for the reintroduction of the now extinct pampas deer.

As a midrange deer, the species has little sexual dimorphism. Males are slightly larger than females and measure between 90 and 120 centimeters in length, with withers of approximately 70 centimeters in height, and can weigh up to 40 kilograms. The color varies according to the region, ranging from red-brown to light brown, with white markings around the eyes, the lips, the chest, and below the tail.

Pampas deer are diurnal animals. They usually form small groups of up to six individuals, unless they are grazing with other groups – at which time the total can reach up to 50 individuals. Although most of the adult males are usually sighted alone, younger adult males can be seen forming groups during the process of growing their horns.

Pampas deer are exclusively herbivorous animals and will eat almost any plant, but they prefer fresh leaves, buds, flowers and shrubs. They are considered grazers and trimmers, as they are able to consume more than 78 different species of plants.

The average length of gestation is seven months, with each female deer giving birth to one offspring at a time. Births occur throughout the year, although they are more frequent between the months of August and November. The cubs are weaned at around four months of age, when mothers re-enter the heat period.

Considered “vulnerable” by the national list of ICMBio, and “nearly threatened” by the IUCN, the species has demonstrated a decline over the years. The original population was brutally reduced due to excessive hunting and habitat loss for agriculture. In some regions, such as the states of São Paulo, Minas Gerais, Rio Grande do Sul and Paraná, the species can be considered critically endangered.