Giant otters are significant predators in rivers of South American. Relatives of otters, they actually look much larger than otters, and are therefore known as giant otters.

Historically, the species existed throughout most of the South American territory. Today, they appear from northern Argentina to northern South America, but are probably extinct in Argentina and Uruguay. In Brazil, they are found in the Amazon, Pantanal, Cerrado and Atlantic Forest.

Giant otters are the largest species of otter, and are called wolves of the river, as well as mustelidae, in Brazil. They are nearly two meters long, ranging between 100 and 130 centimeters in length, with a tail of 45 to 65 centimeters. They weigh from 22 to 35 kilograms, and males are slightly larger than females. Each giant otter has white spots on the neck unique to each individual, and used for identification of the animals. They have membranes between their fingers that facilitate mobility in the water.

Giant otters are found in slow current rivers and lakes, near forests and in marshes, preferring those that contain clear water. Giant otters are diurnal and rest at night in burrows under roots or under fallen trees on the banks of rivers, known as dens. Twenty-two vocalizations have been identified, used for communication between individuals. They swim very well and seem clumsy out of water, but can travel on land for large distances between rivers. Young ones are raised in the dry season, during which the use of rivers by parents is reduced. They live in groups of up to 20 individuals, some in couples with their young and cubs. But solitary animals are also seen in search of territory and a mate. Family members actively defend the central area of their territories that range from 12 to 32 kilometers of river. Both males and females patrol and mark their territory. Distinct groups are avoided, and so conflicts are rare.

In some areas of the Pantanal, encounters have been recorded where groups of giant otters expel jaguars from riverbanks through alarm vocalizations and other aggressive behaviors. Although otters are sometimes part of the jaguars’ diet, giant otters have been observed to be at an advantage during these encounters.

Giant otters can eat up to three kilograms of fish per day. Other prey is rare but may include crabs, amphibians, small mammals, mollusks and birds, as well as larger quarry such as alligators, snakes and turtles. Instead of eating in the water, the otters transfer most of the fish they catch to be consumed on the banks of the river.

Young giant otters are usually born at the beginning of the dry season, from August to October. Gestation lasts 55 to 70 days. However, it has been observed that pregnancy slows down during captivity. Generally, one to three cubs are born, with the possibility of reaching five in a litter, each weighing around 200 grams, and 33 centimeters long. After three to four months they begin to eat solid food and are weaned at nine months old. Cubs stay with their parents until the birth of the next litter and possibly for some time afterwards. Sexual maturity is reached after two years of age.

Giant otters have been considered as “endangered” by the IUCN, but “vulnerable” according to the national list of the ICMBio. Giant otters have suffered a sharp decline in their population in recent decades. They are probably extinct in Minas Gerais, Rio de Janeiro and Rio Grande do Sul and are in serious danger of extinction in São Paulo and Paraná.

Currently, the main threats to the species are habitat destruction and pollution of river waters by pesticides and heavy metals, such as mercury, that originate from mining. In addition, the destruction of riverbanks for the construction of hydroelectric plants is also a risk factor. Other threats to giant otters are conflicts with fishermen and the hunting of their fur, which has decreased when compared to a few decades ago. 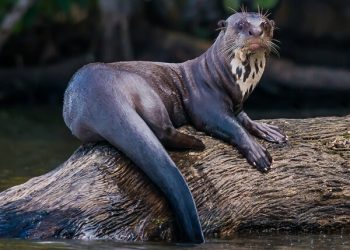 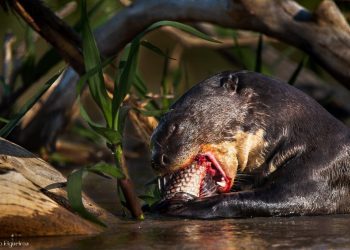 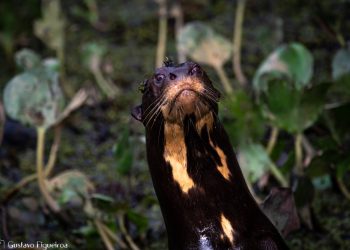