The collared peccaries and white-lipped peccaries – also called peccaries – means "animal that makes many paths in the woods" in Tupi-Guarani. They belong to the family Tayassuidae. 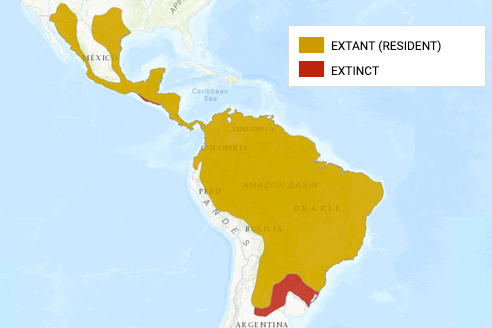 The main differences between members of this family, and swine or true pigs, includes the presence of a gland near the tail that produces a strong smelling secretion, used to mark territory and assist in recognition between individuals. The fangs of peccaries point downward, while those of the swine are longer and curved, pointing upwards. The species of this group usually produces two cubs, while swine can have a litter of up to 12. There are three species in this family, but there might also be a fourth species in the southern Brazilian Amazon.

These animals are found in a wide variety of places, from the southern United States to central Argentina, and are also present in all biomes throughout Brazil except in the extreme south of the country.

Because of their close resemblance, collared peccaries may easily be confused for boars. They measure from 84 to 106 centimeters in length, with the tail measuring about 10 centimeters. They may weigh between 15 to 30 kilograms. The body is gray-brown with a white stripe on the neck, hence their common name in English of white-collared peccary. This is the easiest way to distinguish them from the white-lipped peccary, whose white marking extends from the jaw to the top of the muzzle. They have an excellent sense of smell, which they use to find food.

Collared peccaries are present in many habitats, including forests, savannas, grasslands and even deserts. They are usually most active in the early morning and late afternoon, and rest in the middle of the day. They are more nocturnal in areas of strong heat such as Caatinga, Pantanal and Cerrado. They generally live in groups of 15 individuals, but some groups can contain up to 50 members. They hide in holes in the ground or in hollow logs. Their eyesight is bad, and they use odor to maintain cohesion among group members.
There is a weak hierarchy in the group: females may mate with several males, who do not seem to compete even when females are in heat, which is unusual among mammals. In most cases they are territorial, defending their territories against other groups. They emit various vocalizations, including beating of their jaws. They use secretions produced by glands to demarcate their territories on stones and tree stumps. They also like to roll in the mud. White-collared peccaries often appear in low population densities, especially when there is a high density of white-lipped peccaries, which are bigger and stronger.

Collared peccaries are omnivores and their diet varies according to the habitat in which they live. They eat many green plants, roots, fruits and seeds, as well as small vertebrates and invertebrates. They also eat cacti, although these are very acidic. These animals are important seed dispersers, in addition to helping control the diversity of plant species.

Gestation takes approximately 145 days, when between one to four cubs are born, although usually two. The cubs can already follow their mothers one hour after birth, and suckle for approximately six weeks.

Considered as “low concern” by the national lists of both the ICMBio and the IUCN, the greatest threat to this species is habitat loss.