The word anteater comes from the Tupi, meaning "small mouth". The closest relatives of anteaters are the sloths; both belong to the Pilosa order.

The body of this large animal measures between 98 and 120 centimeters in body length, with a tail that varies from 65 to 90 centimeters. Weighing between 31.5 and 45 kilograms, males are usually larger than females. Their coat is a gray-brown color, with a black side band rising from the chest towards the middle of the back, bordered by two white bands. The giant anteater has an elongated skull and a long snout, with the mouth situated at the tip of the snout. The ears and eyes are small, but the tongue is long, reaching 60 centimeters. The front limbs are strong and muscular, with strong, sharp nails, used to dig open termite mounds. The tail is large and hairy, resembling a hoisted flag, which explains its popular name in portuguese.

Although giant anteaters are usually most active at the end of the day, they may function during the entire day in colder weather, or all night in environments that are disrupted by humans. They are animals of solitary habits, except when the female is pregnant. They have a very well developed sense of smell, although their vision is poor. Their territory comprises between 9 and 25 square kilometers. Giant anteaters are excellent swimmers, including in major rivers, and they like to bathe in the mud to cool off and rid themselves of parasites.

The diet of giant anteaters consists mainly of termites and ants, but they also eat beetles and other invertebrates. Giant anteaters use their long tongue, which is covered by a thick, sticky mucus layer, to capture insects. With their long claws they are able to dig open termite mounds and anthills, and are capable of consuming up to 30,000 ants or termites in a single day.

They have no time set for reproduction, so this occurs throughout the year. The gestation period averages 190 days, with females giving birth to a single offspring at a time. The cubs live on their mother’s back for months until weaning, where they are camouflaged and protected from predators. When they start to eat solid food, the cubs leave the mother’s back to forage, feed themselves and then return to shelter on her back. At Caiman Ecological Refuge in southern Pantanal, a giant anteater mother has been registered with two cubs of different sizes on her back.

Giant anteaters have been listed as “vulnerable” both on the national list of ICMBio and by the IUCN.

The main threats to the species are being run over by vehicles, forest fires, habitat loss and hunting. 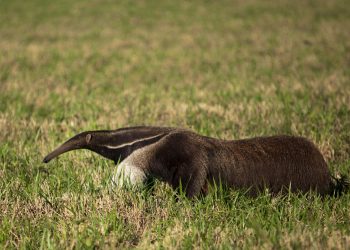 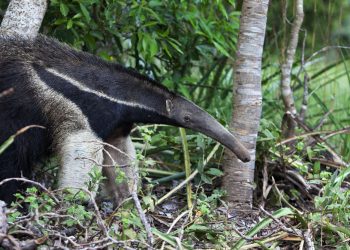 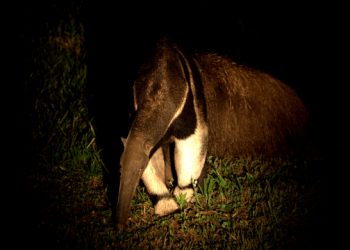 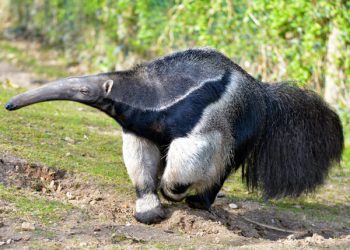 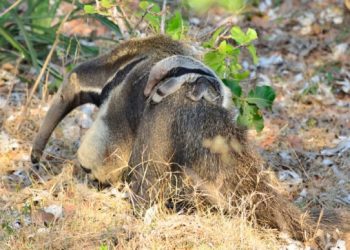