The maned wolf is the largest canine in South America and can reach up to 36 kilograms in weight.

The animal is known for its long legs and golden hair. It is regarded as the symbol of the Cerrado, although it occurs in other biomes.

The maned wolf is a canine endemic to South America, only present in the southern portion of the American continent. Distribution of these wolves is estimated to be located only in Paraguay, Brazil, Argentina and the Bolivian plains. In Uruguay, the last observed individual was registered in 1990.

This species is commonly found in naturally open environments, with a higher density of grasses and shrubs, and sparse trees – as in the regions of Cerrado, Pampas and Chaco. It is also possible to locate them in other regions, such as the Pantanal and the Atlantic Forest, but this is very rare. Some maned wolves have been recorded in transition regions between the Cerrado and the Amazon, and between the Cerrado and the Caatinga.

The living area of the species varies from 40 to 123 square kilometers, depending on factors such as time of year, availability of prey and biome characteristics. Some studies indicate that the living areas of females are larger than those of males, but females will also significantly reduce their living areas when mothering small cubs.

The maned wolf is the largest member of the Canidae family (the same family as dogs and foxes) in South America. Its scientific name is Chrysocyon brachyurus, which means “golden dog with short tail”. The nickname “guará” comes from the Tupi, meaning “hair of fluff”.

It can reach between 95 and 115 centimeters in body length, with the tail measuring between 35 to 50 centimeters. The height of the withers is 90 centimeters. It weighs between 20 and 36 kilograms, with no significant differences between males and females.

The maned wolf has very large ears, similar to some foxes. Although it is called a wolf, the genetic makeup is different to those of other family members. The maned wolf is considered to be the only living species belonging to the group, so it is not classified as a “real” wolf, and also not as a dog, fox, coyote or jackal. The closest relatives of the maned wolves on the evolutionary scale are the vinaigrette dogs (Speothos venaticus), although morphologically these animals are very different from each other.

The body color varies from golden red to orange, and the hair on the mane, legs and snout is black. There is a whitish tuft at the tip of the tail – a characteristic already present in the cubs at birth – as well as a white spot under the throat. Long hair along the body, especially at the nape of the neck, forms a type of mane, which the wolf can raise, to stand up straight, if necessary. This ploy is adopted to increase its profile when it feels threatened, or simply to show off. It has a slender body, with long, thin legs, probably a physical adaptation because of the need to move swiftly through open areas covered by high grasses.

Their vocalization is very characteristic and is called “ulido”. More studies are needed, but it appears that vocalizing occurs more frequently at certain times of the year, which may be related to the reproductive period. The calls echo over long distances and are often answered by another wolf, implying that this could be an important form of communication for this species.

The maned wolf is considered monogamous, rarely taking a partner outside of the reproduction period. However, genetic studies of free-ranging animals have revealed evidence of females generating pups from another male, other than her partner. The couple generally shares the living area, and, at the beginning of the mating period, they begin to communicate through vocalizations, body odors, feces and urine. Studies reveal that males help to raise cubs, but the female controls the male’s participation in this process.

More information about parental care is still unknown in free-living animals. The parents tolerate the presence of their young ones until the end of the first year, after which time the young – especially the males – disperse out of their parents’ territory. The maned wolf uses markings (urine and feces) to delimit its territory, which it patrols during the night to avoid potential invaders. The species may tolerate other individuals if living in areas with plentiful resources.

The maned wolf has nocturnal habits, with peak activities at dusk and dawn: this behavior appears to be linked to temperature and humidity. On colder and cloudy days, it extends the activities of swift movement through high grasses and hunting to take place throughout the day. On hotter days, the maned wolf spends hours lying in one place, taking only short trips during peak temperatures times. Unlike other big dogs, the maned wolf does not form a pack. It hunts alone, rotating its big ears towards the movement of the prey, attacking with a jump and capturing the prey with its jaws.

The animal has adapted very well to the Cerrado, using the open fields to move stealthily when hunting. They occasionally frequent thicker forest areas for rest, but prefer to sleep during the day in regions of high grass or scrubland. In denser forests there is the added risk that the species may be more exposed to predation by large cats (jaguars and pumas).

The maned wolf makes use of scattered roads and termite mounds to mark its territory, defecating and urinating in a very visible manner, thereby making its territorial traces (feces and footprints) easy to find. The odor of their urine is characteristically extremely strong, and can still be smelled for days after the animal has urinated on the site.

A generalist carnivorous species (omnivorous), the maned wolf is perceived as opportunistic. Their diet varies seasonally, according to the availability of specific food in the area. They mostly feed on fruits, small vertebrates, insects and eggs, but may include larger prey in their diet such as deer, field foxes and emus, although predation of large animals is rare. The maned wolf can be found foraging in farming areas in search of small mammals and birds, which could expose them to accidents with agricultural machinery and contamination from agrochemicals used in these plantations.

Their anatomical characteristics enhance the ability to hunt prey in environments containing the high grasses predominant in their habitat. Strategically, the maned wolf is a solitary hunter; no records exist of cooperative hunting in the wild.

An important food resource is the Lobeira (Solanum lycocarpum), a tree that bears fruit all year round, found mainly in the Cerrado. The maned wolf consumes large quantities of fruit and eliminates the seeds intact in the feces, which makes this species an important seed disperser.

The maned wolf is monogamous. The paired couple usually unites during the breeding period, which occurs between April and June. They generally share part of their territory and, at the beginning of the mating period, the couple begins to communicate through vocalizations, body odors, feces and urine. Gestation lasts an average of 65 days, producing from one to seven puppies. The pups are born with a very dark, almost black, coat, but the tip of the tail is white – a characteristic maintained throughout their lives. As they grow older they gradually change color, losing their dark shade at approximately ten weeks. They suckle for about four weeks and then start eating food regurgitated by their mother or father. The pups accompany their mother and learn to hunt from three months of age.

Burrows are usually located in dense shrubs or clean fields, with tall grasses. Studies in captivity reveal that males help to raise the cubs, but the female directs the participation of the male in this process. However, there is scant knowledge about parental care in free-living animals. The offspring normally leave their parents’ territory when they reach one year of age, at which time they reach sexual maturity.

Considered “nearly threatened” by the IUCN, maned wolf populations have declined significantly over the years. It is necessary to understand how landscape changes – caused by urban sprawl – affect the maned wolf populations, in order to know which actions to take to reduce the impact of these changes and propose new conservation strategies. It appears that this species is expanding its distribution in some regions, which may represent their escape from the areas where their original habitat is being destroyed.

The studies carried out through direct monitoring, and the data obtained by radio-collars, allow us to understand their areas of life, territories and habits. These analyses are also useful in taking action for the conservation of the species.

We understand that ecotourism, together with environmental education and scientific research, is one of the main and most powerful tools to reverse the advancement of threats. By valuing wolves in the wild, we build bridges between science and the population, generating practical results that benefit the local community and wildlife alike.

The three main threats to the species are environmental mischaracterization/habitat loss (reduction in the quality of areas suitable for survival); the loss of individuals due to conflicts with humans (hunting); and pedestrian collisions.

If only habitat loss is considered, it is estimated that the species will suffer a population reduction of at least 29% in the next 21 years (three generations). This estimate is based on an average Cerrado deforestation rate of 1% per year (2002 deforestation data). This population loss places the species in the “vulnerable” category (VU) in the Cerrado. 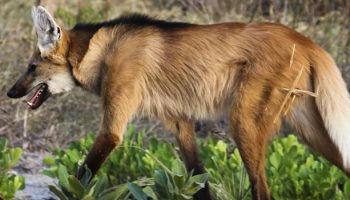 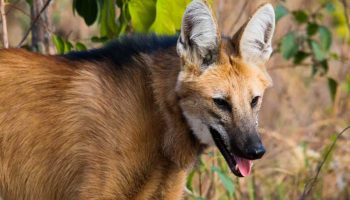 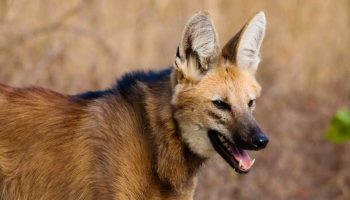 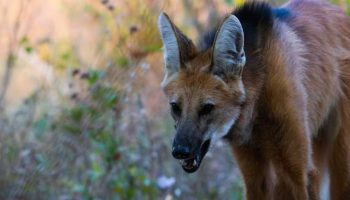 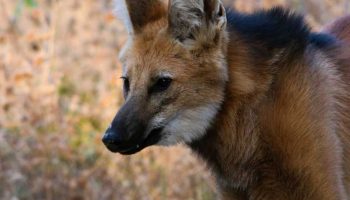 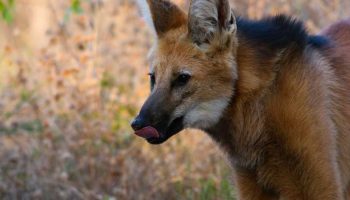 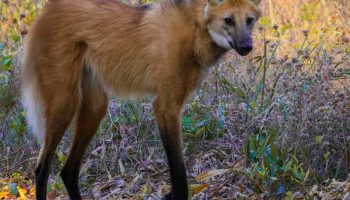 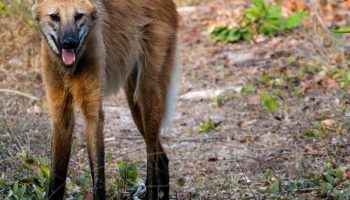 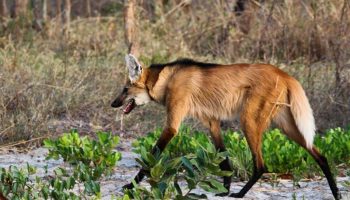 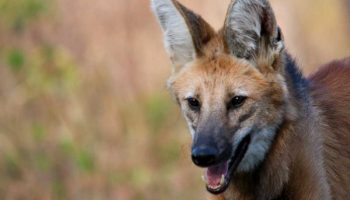 Este site usa cookies para melhorar sua experiência enquanto você navega pelo site. Desses cookies, os que estão categorizados são armazenados no seu navegador conforme necessário, pois são essenciais para o funcionamento das funcionalidades básicas do site. Também usamos cookies de terceiros que nos ajudam a analisar e entender como você usa este site. Esses cookies serão armazenados no seu navegador apenas com o seu consentimento. Você também tem a opção de desativar esses cookies. A desativação de alguns desses cookies pode afetar sua experiência de navegação.This website uses cookies to improve your experience while you navigate through the website. Out of these cookies, the cookies that are categorized as necessary are stored on your browser as they are essential for the working of basic functionalities of the website. We also use third-party cookies that help us analyze and understand how you use this website. These cookies will be stored in your browser only with your consent. You also have the option to opt-out of these cookies. But opting out of some of these cookies may have an effect on your browsing experience.
Necessary Always Enabled
Necessary cookies are absolutely essential for the website to function properly. This category only includes cookies that ensures basic functionalities and security features of the website. These cookies do not store any personal information.Os cookies necessários são absolutamente essenciais para que o site funcione corretamente. Esta categoria inclui apenas cookies que garantem funcionalidades básicas e recursos de segurança do site. Esses cookies não armazenam nenhuma informação pessoal.
SAVE & ACCEPT