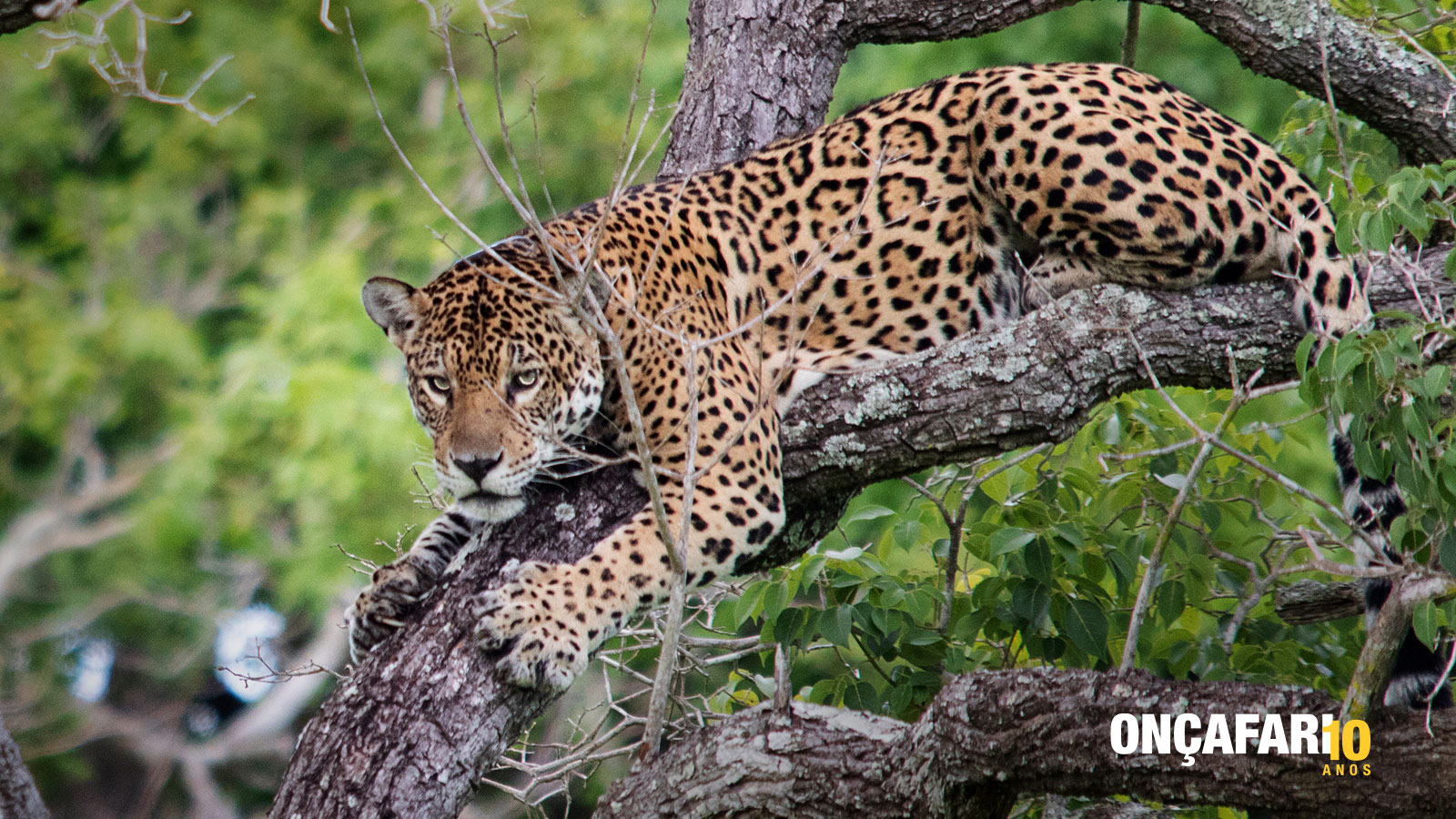 Our jaguars are roaring.

The maned wolves are howling.

Now it’s our turn to make some noise, guys!

For we are celebrating Oncafari’s 10th anniversary!

First things first: let us start by thanking you for the constant and unconditional support each and every one of you guys has been showing us throughout this past decade. We would never have gotten this far without it.

HOW far, you ask?

Maybe we should engage in a before/after comparison. How about that? Perhaps this will give you a better and clearer understanding of where we were back in 2011 and where we are today, in 2021.

Ten years ago, in 2011, Onçafari was born with the mission: to build a future in which the environment was not only preserved, but recognized – and valued – as well. A future where jaguar sightings would no longer be a sign of sheer chance and luck, but would – instead – be a sign that they were fully prospering.

Speaking of jaguar sightings, here’s the first before/after comparison: back in 2011, less than 7% of the guests who visited our Caiman base, in Pantanal, were able to experience a jaguar sighting. Now, thanks to our relentless efforts and your continuous support during the last ten years, this number rose to more than 98%!

To this day, over 220 jaguars have already been identified and are currently being monitored by us, in different biomes of Brazil. And yes, you have every right to be proud, as this is your victory too.

Ok, so far, we’ve only mentioned the victories involving jaguars and that were achieved at our Caiman base, in Pantanal. Our accomplishments, however, extend way beyond our work with the jaguars: they also take place at different bases, involving several other species and, most importantly, acting upon five other different – and indispensable – fronts.

Throughout the last decade, out work has left a positive impact, both directly and indirectly, on 6 different fronts:

It’s one of the powerful tools used to foster and promote the recovery of entire populations of endangered species. Several different species in several different environments can benefit from it. In partnership with CENAP/ICMBio, we were responsible for the first-ever successful case of jaguar reintroduction IN THE WORLD, with sisters Isa and Fera being brought back into the wild. That accomplishment alone would have made these past 10 years worthwhile. But there are many others, and you can learn more about them in the next 5 fronts.

By bringing conservation and responsible tourism together, we’re able to develop the environmental, social and economical aspects of the areas we work in. In other words, we bridge the gap between “protection and appreciation of native species” to “job creation and income generation”, giving local residents the opportunity to access the benefits of social mobility through a more balanced environment. It’s a win-win scenario, especially for Nature. Safari trips that started and are now thriving at the Caiman base can be made at different bases as well, not to mention other nature-centric activities that are already in the works.

The more we know about something, the better the chances of preserving it. Which is why we’re constantly investing in research: so that we can improve our knowledge about jaguars and maned wolves. For example, during our work on the field and Safari trips, we take notes on the animals’ behavior and keep track of their geographical distribution. We also collect data from camera traps and biological samples from the animals’ blood. These efforts allow us to increase our scientific knowledge about the species we work with, making us better equipped to evaluate our successes, thus helping us to plan the next steps.

People can’t worry about the environment when their own basic needs haven’t been met yet. The only way to sustainably expand the areas of protected nature is by taking care of people as well. That’s why Onçafari makes it a point to serve the communities of the areas and regions where our bases are found. Not just by promoting activities in ecotourism (which, as seen, is a major source of income for these people), but also by donating food, cleaning products, personal hygiene items, books to the population as well as other resources that meet the needs of nursing homes, hospitals and schools. We also use education and cultural appreciation as a way to directly impact the communities. The future, after all, depends on all of us working together for this one, single, common cause.

Knowledge is the power we harness to change the world. So, it’s up to us to spread the knowledge about jaguars, maned wolves and the nature we’re all a part of. This front is all about teaching people about the importance of preserving our planet’s biodiversity, which is something we do through talks in schools, at universities and other kinds of venues; by publishing books, producing documentaries and creating content for magazines, websites and TV, not to mention social media, of course. This way, everyone gets empowered to preserve Nature.

More than ever, we need to show the value of our forests and other wild areas in order to protect Nature. This front is where Onçafari proves that an area with preserved Nature is more valuable than an area that’s been deforested. We have conceived alternative forms of economic development that, instead of taking advantage of our biodiversity, it takes it into account: everything is based on the resources and services that Nature is able to provide us with simply because it is preserved. Responsible tourism, carbon credit and biodiversity valuation are just a few of the alternatives that generate income and that motivate people to keep protecting the forests.

Besides producing technical reports that enable and lead to the creation of new areas of conservation, we also reach out to people in order to get the necessary resources to purchase areas that will, immediately after, get to be preserved and managed by Onçafari.

These work fronts are developed at our bases, which have also multiplied during the past decade.

During the last 10 years, we grew from 1 to 7 bases and now operate in four Brazilian biomes, impacting thousands and thousands of acres: 3 are located in Pantanal (Caiman, Refúgio da Ilha and Reserva Santa Sofia), 1 in the Cerrado (Trijunção Logde), 1 in the Amazon (Thaimaçu Lodge) and 2 in the Atlantic Forest (Fazendo Velo Città, and most recently, Legado das Águas).

In the Amazon, for example, we have already reintroduced two jaguars while partnering with Thaimaçu Lodge (thus acting upon the rewild front). During our monitoring efforts of this region, we have identified a great number of species that are, biologically speaking, incredibly relevant and thus, show the importance of protecting this area. Amongst the most notable examples are the jaguars themselves (including a few melanistic ones), bush-dogs, short-eared-dogs and harpy eagles, also known as royal hawks.

Whenever we talk about relevant species, we need to talk about another one of our bases: Reserva Santa Sofia. It hasn’t even been a year since we started monitoring this area and we’ve already noticed the presence of numerous jaguars and even maned wolves. This, obviously, translates into a great opportunity for the ecotourism front. Santa Sofia is also a key area regarding our forest front.

Speaking of opportunities, Legado das Águas, the largest private Atlantic Forest reserve in the country, offers plenty of them as far as the social and education fronts are concerned: we have already visited some of the schools in the surrounding areas, spreading knowledge about our cause and engaging the local communities in the mission of preserving and appreciating the nature they find themselves in. There’re lots of opportunities in the ecotourism front as well, given that this area is home to many iconic species, such as albino tapirs, jaguars, ocelots, margays and muriquis.

Fazenda Velo Città, in turn, stands out in the science front, as it supports our work in research, allowing us to improve our knowledge on the maned wolves that inhabit that particular region.

Finally, our Caiman base, in Southern Pantanal: this is where it all started, back in 2011. It’s a preserved area with an incredibly rich biodiversity and it’s where the Onçafari dream came true. At Caiman, we act upon all six fronts and have the privilege of learning every single day with the jaguars of the region. People from all over the world, on the other hand, have the privilege of taking Safari trips to get an up close and personal look at the largest felid species in the Americas. Caiman is also where our first reintroduction facility was built, the place jaguars Isa and Fera called home before being released into the wild to live freely.

Safari trips are now being organized at Trijunção Lodge as well, for those who are interested in getting to know the Cerrado biome and in getting a closer look at the maned wolves of this most incredible region of Brazil. Trijunção is located right where the States of Minas Gerais, Bahia and Goiás meet and it’s where we’ve been developing our fronts in order to protect not only the maned wolves, but also the most diverse savannah on the planet.

In 2020, we’ve strengthened our partnership efforts even more and now count on Refúgio da Ilha, located on the Salobra river delta, right at the border of Pantanal and Cerrado. With an amazingly rich biodiversity and breathtaking stretches of river, our team at Refúgio has also been working hard to help jaguars get used to the presence of boats. This way, we’ll be able to not only study them, but also give the world a chance to appreciate them.

The table below shows numbers that fill us with pride: they are the result of our team’s continuous efforts and were collected during tourism activities held in three of our seven bases.

A TOAST TO THE NEXT DECADE

These facts and numbers reflect the passion and the sense of responsibility we have been putting into our work since 2011. And believe us: this is only the beginning. There’s a lot more to done for the conservation of the environment and the fauna and flora it comprehends.

On this most special occasion, as Onçafari celebrates 10 years of relentless and uncompromising commitment to the conservation of biodiversity, we’d like to invite you to join us in ushering the next decade, which promises to be even more fruitful and rewarding.