In March 2021, the article entitled “Is reintroduction a tool for the conservation of the jaguar Panthera onca? A case study in the Brazilian Pantanal” (access link:  https://doi.org/10.1017/S0030605320000460) was published in the International Journal of Conservation “Oryx” . This publication presents to the world the methods and results used by our team and collaborators to reintroduce the sisters Isa and Fera back to nature, which resulted in the first successful reintroduction of jaguars in the world.

Early History of Isa and Fera

Isa and Fera are two jaguars that were rescued in Corumbá (MS) in June 2014, when they were approximately 3 months old. Their mother crossed the Paraguay River with the two cubs, on the border between Brazil and Bolivia, and to rest from the crossing the family climbed a tree. But, as the urban center of Corumbá extends to the banks of the river (Image 1), this tree was located on the property of a resident, who was startled when he saw three jaguars in his yard. In an attempt led by local authorities to remove the jaguars from there, the mother of Isa and Fera accidentally died. The two cubs were then anesthetized and transferred to the Wild Animal Rehabilitation Center (CRAS) in Campo Grande (MS), where they remained under proper care in a small enclosure for 9 months. After conversations and planning about the fate of these sisters, they were transferred to “Maintainer Santa Rosa” (Itapira, SP), a place with better infrastructure and less contact with human beings, already aiming at the reintroduction of the two sisters in nature.

Image 1 – City of Corumbá on the banks of the Paraguay River. Photo: IPHAN/Nabil Bonduki

Arrival at the Caiman Ecological Refuge

In July 2015, Isa and Fera finally landed at the Caiman Ecological Refuge (REC), where a 10,000 m2 site (equivalent to a soccer field) was planned and built in the middle of the Southern Pantanal especially for the reintroduction of the two orphans (Image 2). There, thanks to the efforts of the teams from Onçafari, Cenap/ICMBio and IMASUL (Federal environmental institutions), and with the help of several collaborators, the sisters learned to recognize their natural preys (caimans, peccaries, capybaras, among others), to hunt, to vocalize and to interact with free-living jaguars (still through the enclosure screens). There were many uncertainties that permeated this bold attempt of reintroduction. According to Leonardo Sartorello, biologist, Onçafari's reintroduction coordinator and one of the authors of the article, “one of the concerns was whether the training process with live preys would really work and if, after release, the two would be able to hunt in the wild”. 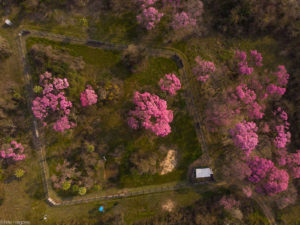 In 2016, the two jaguars were fully able to be released, already successfully hunting all the main preys they could find and developing the behaviors performed by a wild jaguar. Then, in May 2016, they were anesthetized for clinical evaluation, placement of GPS monitoring collars and collection of biological samples. All tests performed were negative for the presence of parasites and infectious diseases, showing that both were healthy and ready for release. After less than 11 months living in the REC enclosure, on June 9, 2016, now just over 2 years old, the enclosure's gates were opened and Isa and Fera returned to freedom, once again having the Pantanal plain as their home.

The doors of the enclosure remained open for 3 months, so they could return when and if they found it necessary (in a methodology called soft release). The two, after exploring large extensions within the REC, established their living areas in regions relatively close to the enclosure (Video 3). According to Sartorello, “the differentials for the success of the reintroduction were keeping the two sisters isolated from people, so as not to be 'humanized', also the system developed for them to learn to hunt native preys in the region itself, with different levels of difficulty for the jaguars to improve their hunting techniques, and a large enclosure built on the release site”.

Birth of cubs and the importance of reintroduction

Isa and Fera are monitored by our Onçafari team. Since they gained freedom, they are seen by us and by several guests who visit the REC. Today we can say they are true Pantanal jaguars, hunting wild preys, defending their areas of life, interacting with the other local jaguars and even mating with males from the region. In 2018, the big news: both had offspring in their free lives. Isa had Aurora (Image 3), the first cub born from a reintroduced jaguar in the world! Soon after, Fera gave birth to Céu and Ferinha (Image 4). The three cubs grew up with their mothers and became independent in 2020. 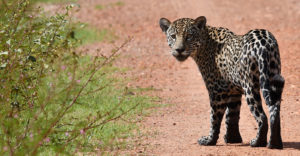 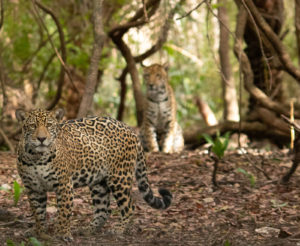 Image 4 - Ferinha (in front) and Céu (in the background), the first cubs of Fera in nature. Photo: Edu Fragoso

Isa had a second cub in 2020, called Aracy (Image 5). Months later, Fera also appeared with its second litter, a cub named Turi (Image 6). Thus, the project with Isa and Fera was a success, not only individually, but also at a population level, as both were successful in breeding and raising their young in the wild. “The greatest achievement of this pioneer project was to return to nature two animals that would be condemned to spend the rest of their lives in captivity and, today, we observe that the two have already generated descendants, helping to improve the population of jaguars of the region”, says Leonardo. The coordinator of Onçafari Rewild adds that “reintroduction is a viable and replicable method. It can help animals that live in captivity to have a second chance in the wild, which are usually 'stocked' at Screening and Rehabilitation Centers across the country.” 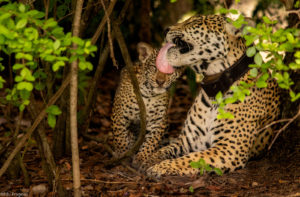 And the good news don't stop there. The Onçafari team discovered that the sisters Isa and Fera are already grandparents. Aurora (Isa's first cub) had a cub named Baadaye, and Ferinha (Fera's cub) was recently spotted with a cub of approximately 3 months old (Image 7), which has not yet been named. Through the reintroduction of the two sisters only, there are now 9 new jaguars in the local population. Technically speaking and in accordance with international guidelines for the reintroduction of animals, the project with Isa and Fera reached the maximum degree of success, with the second generation of descendants of the two sisters living freely in the Pantanal plain. 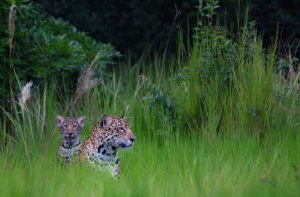 According to the authors of the article, “this reintroduction project was extremely important to develop and test a jaguar reintroduction methodology in nature, aiming at its application in more critically endangered populations and in different biomes. It was very important to test in the Pantanal, where the situation of the jaguar population is a little more comfortable, instead of trying right from the start in the Atlantic Forest, for example, where any individual is extremely rare. In addition, this methodology is also important for the genetic management of extremely threatened and isolated subpopulations, such as those in the Caatinga, Chaco Argentino, Mata Atlântica, and those in Arizona (USA)”.

“Even considering the high costs of the process until it culminates in the release, reintroduction is an important tool that is added to other long-term conservation strategies of the species. In addition, the methodology used with Isa and Fera can be adapted and repeated with other species of large carnivores with similar social behaviors”, complement the authors of the Oryx article.

Part of the success of Isa and Fera's release is due to the collaboration of several people and institutions in pursuit of a common goal: the conservation of the jaguar. In addition, the choice of the Caiman Ecological Refuge (REC) as a place of release was of great importance. REC has an area of approximately 53,000 hectares (530 km2), located between Miranda and Aquidauana (MS), being the place where Onçafari was created in 2011. Caiman is also a reference in ecotourism in the Pantanal, receiving guests from all over the world who can observe jaguars and all the Pantanal fauna in nature. The wide protected extension of the REC and all its management focused on conservation, together with the knowledge about jaguars of the team from Onçafari and Cenap/ICMBio, were undoubtedly decisive for the realization and success of this project.

Reintroductions around the world

The success of Isa and Fera adds to other cases of reintroduction in the world. One of the best known is that of wolves (Canis lupus) in Yellowstone National Park (PNY). This species was exterminated from the PNY in 1926. Only in 1995 and 1996, the first wolves from Canada were reintroduced into the Park and, today, there is already a stable population, resuming the ecological balance of the area. Another successful case is that of the Iberian lynx (Lynx lynx), which by the middle of the 20th century was completely extinct throughout the continental part of Western Europe. Thanks to a sum of conservation strategies, which largely include reintroduction, and collective efforts by several countries, the current distribution and population size of the species are much greater than in recent centuries. In Brazil, an example of success is that of the golden lion tamarin (Leontopithecus rosalia), which is on the verge of extinction, but, due to captive reproduction and reintroduction started in the 1980s, wild populations already reach around 1,000 animals.